Are We Heading for the Next Property Market Crash? 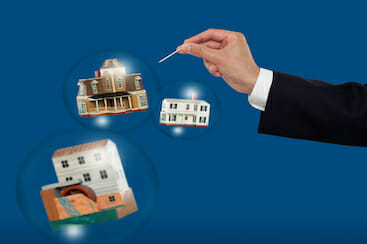 Rising interest rates and sharp increases in the cost of living have led many people to wonder if we are heading for the next property market crash. With UK house prices reaching record highs and the Bank of England warning inflation could exceed 10% this year, is the property market bubble about to burst?

Despite the pandemic, house prices have continued to surge relentlessly over the last few years. Official ONS figures released on Wednesday reveal the average home in England was worth £297,524 in March 2022, a 9.9% rise on the previous year, and almost 20% higher than in March 2020.

Nationally, prices in the twelve months to March increased by 11.7% in Wales, 8% in Scotland and 10.4% in Northern Ireland. London remains the region with the lowest annual growth (4.8%) – but it’s also by far the most expensive place to buy a property, with an average home worth more than £500,000.

Overall, the average UK property has soared to a record high of £286,079 according to the most recent April Halifax Price Index. This is an increase of 1.1% on March, and the tenth consecutive monthly rise, the longest run since 2016. The rate of house price growth has actually accelerated since the stamp duty holiday came to an end last year – but the latest figures do show a slight slowing of the growth compared to the 1.4% rise recorded in April.

Historic low interest rates are a major contributing factor, lowering the cost of borrowing and fuelling demand despite high prices.

In addition, there has been a shortage of housing supply for a number of years, especially for homes with lots of space and greenery – something people increasingly craved during the heights of the pandemic and successive lockdowns..

But for how much longer can this continue? Prolonged low interest rates may have made borrowing cheaper over the last decade, but sky high property values have made home ownership a distant dream for many. With interest rates on the rise and a very real cost of living crises affecting vast swathes of the population, is the red hot property market set to cool or even crash?

Property experts are divided on the outlook for the UK market in 2022, but few are predicting sharp price falls in the months ahead.

“For now, at least, despite the current economic uncertainty, the strong increases we’ve seen in house prices show little sign of abating. Demand in the housing market remains firm and mortgage servicing costs are relatively stable with fixed-rate deals making up around 80% of mortgages on homes across the industry, protecting many households from the effects of rate rises so far.

“However, the headwinds facing the wider economy cannot be ignored. The house price to income ratio is already at its highest ever level, and with interest rates on the rise and inflation further squeezing household budgets, it remains likely that the rate of house price growth will slow by the end of this year.”

This view was largely backed up by the April 2022 UK Residential Market Survey by the Royal Institution of Chartered Surveyors, which found most contributors expected prices to carry on rising both in the near term and over the year ahead. 62% of respondents expect prices to increase – but this is down from 78% in the February survey.

But not everyone agrees. Writing in The Independent, Sean O’Grady writes that a housing crash is an “inevitability” as consumer confidence falls as a result of soaring inflation, rising interest rates and the failure of pay to keep up with inflation.

Some believe that putting a positive spin on property prices may well keep them high, or at least prevent a crash, but given the state of the economy and the bleak outlook ahead, it doesn’t look good.

What’s Next for the UK Property Market?

While it’s difficult to predict the future, the most commonly held view is that house price growth will start to slow this year. Despite prices continuing to rise and few signs of a major slowdown, the rate of growth has dipped slightly. It will be interesting to see what happens as interest rate rises and inflation make their presence felt.

Important note: The advice provided in this article is general in nature and does not constitute personal financial advice. If you are unsure whether an investment is right for you, please seek professional advice. If you choose to invest, the value of your investment can both rise and fall so you may get back less than you put in.

Sterling Woodrow is not authorised or regulated by the Financial Conduct Authority (FCA) and clients who proceed to invest will not have access to the Financial Ombudsman Service (FOS) or the financial services compensation scheme. Investors should seek advice from a person who specialises in advising on speculative, illiquid securities.

Unregulated investment opportunities in complex instruments are considered high risk. Therefore, we can only deal with investors who are sufficiently knowledgeable and experienced in dealing with these types of investments and are classified as Sophisticated Investors.

Investors who are not ordinarily resident in the United Kingdom should ensure that they comply with the laws of their local jurisdiction before investing.

If you do not meet these criteria, you must NOT take any further action and leave this site immediately.

Request An Expert Property Investment ConsultationPlease fill out your details below and we will be in touch shortly.
Suitably qualified investors include:

(defined in FSMA, Section 48(2) Somebody who had, throughout the financial year immediately preceding the date of receipt of this communication, an annual income to the value of £100,000+ OR net assets to the value of £250,000+ excluding the property used as their primary residence or any money raised through a loan secured on that property, any rights under a qualifying contract of insurance, any benefits in the form of pensions or otherwise, which are payable on the termination of service, death or retirement to which they or their dependents are or may be entitled.