Interest Rate Hikes: How Will They Affect You? 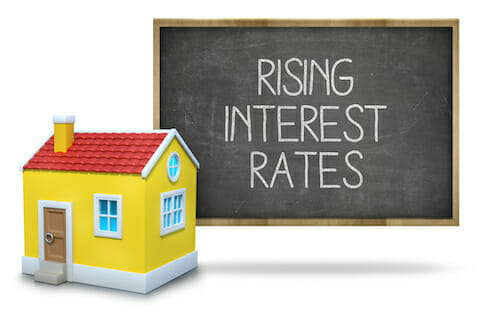 Interest rate hikes have made headlines in recent weeks after being raised from 0.75% to 1% – their highest level in 13 years. With spiralling inflation and house prices reaching record highs, it’s likely that interest rates still have some way to go before they reach a peak. But how high could rates climb, and how might it affect you as a property investor?

Following the financial crisis of 2008, interest rates have remained at unprecedented low levels. As the pandemic took hold in March 2020, they were set as low as 0.1% – and remained there until as recently as December 2021.

But with the easing of Covid restrictions, increased consumer spending and a shortage of supply across many industries, it’s unsurprising that interest rates have started to climb as the Bank of England seeks to curb soaring inflation.

In May, the Base Rate was hiked from 0.75% to 1%, the fourth consecutive rise in a matter of months – and their highest level since 2009. Despite this, few believe interest rates won’t increase again in the coming months. They are widely predicted to reach 1.25% later this year as the cost of living continues to mount – but they could go even higher.

According to a study by the Office for Budget Responsibility (OBR), the Government’s economic advisor, interest rates could soar to 3.5% if inflation continues to rise for an extended period of time. The OBR looked at the economic effects of higher and more persistent inflation and described two scenarios where the Bank Rate could go to 3.5% – a level not seen since November 2008.

With the Bank of England recently warning that inflation could top 10% by the end of the year, it’s a situation that doesn’t seem too unlikely.

How Will Interest Rate Spikes Affect Me?

For investors with a variable rate or tracker mortgage, the impact will be felt immediately. This is because these mortgages work by “tracking” the base rate set by the Bank of England and adding a percentage on top. For example, a ‘base rate +2%’ deal means that if the base rate is 1% as it is currently, you’ll pay 3% interest on your mortgage – and so on.

Small interest rate rises might not look much on paper, but they can have a huge impact on your monthly payments, especially on ‘interest only’ buy-to-let mortgages. With these making up the vast majority of landlord mortgages in the UK, interest rate rises are a further hammerblow to already struggling landlords.

A 0.5% or 1% increase in interest rates might seem small, but what many people don’t realise is that if they are paying 2%, for example, a 1% increase means that their monthly payments will rise by 50%.

For investors with a fixed rate deal, new interest rates won’t apply until the fixed period has come to an end – but even then the impact is going to be felt eventually and could be catastrophic for those investors that are leveraged high. .

Be Careful If You Are On A Fixed Interest Rate!

One thing to be very aware of, if you are on a fixed interest rate deal, is the potential difficulty in finding a new deal when your existing one ends.

As I am sure you know, Banks and mortgage companies want to know that you have the ability to make the monthly payments. They have a formula to calculate how much they are prepared to lend you which is based on income, outgoings and you personal disposable income (if the properties are in your name).

The banks, who do not want to get themselves into the same position they did last time, will undoubtedly become more cautious and increase the criteria when carrying looking at a new application to decide how much they are willing to lend..

As inflation rises, and your energy, fuel, food, maintenance and other costs spiral, your profits and disposable income reduces, add the hike in the interest rates into the mix and you will soon see that getting a new deal in the near to medium future, may not be easy at all.

It is apparent that those who are leveraged now may well find themselves in big trouble in the coming months and years as these fixed rates come to an end.

This could leave you in a very difficult position when it comes to renewing the deal.

It is a good idea to be prepared for the worse and do your calculations now and base it on the worse case scenario. If you then think you may have a problem and you only have a short time left, it may be worth changing now. Alternatively, now may well be the time to sell any investment properties in your portfolio that may cause you difficulty.

What Impact Do Interest Rates Have on Property Prices?

It’s important to also consider the impact all this may have on house prices and the property market in general.

Rising interest rates increase the cost of borrowing and hike up monthly mortgage repayments. In turn, this makes it less attractive for people to invest in property, especially for those needing a large mortgage to fund their investment – and enough to put some people off.

With fewer people looking to buy, property prices can start to stagnate or decline. Indeed, interest rate rises combined with the cost of living crisis have led many people to wonder whether we are heading for the next property market crash.

But there are also many different variables at play. The impact of interest rate rises will depend on many different factors such as the size of the increase, the timing, and the available property supply within the market.

As always, it’s important for current and would-be investors to closely monitor interest rates and developments in the property market. It’s well worth seeking the advice of a property investment expert who can help you navigate the market and find the best options for your situation.

It is definitely advisable, for the foreseeable future, to stay well away from lenders, if at all possible, and maybe it is time to look at reducing your borrowings.

Maybe it is also time to look at selling off some of your property assets, using the funds to reduce your liability and hunker down until all this uncertainty shows signs that we are returning to some sort of normality.

Important note: The advice provided in this article is general in nature and does not constitute personal financial advice. If you are unsure whether an investment is right for you, please seek professional advice. If you choose to invest, the value of your investment can both rise and fall so you may get back less than you put in.